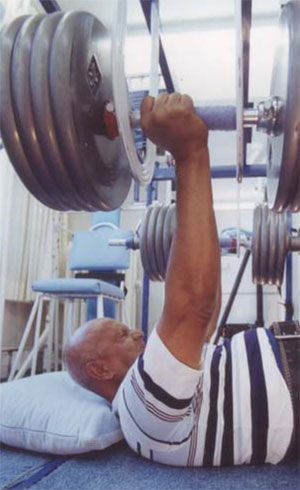 This lift made its first appearance in 2000 as part of Sri Chinmoy’s lead-up to his 69th birthday celebrations. He began practising on June 4th with two 120-pound dumbbells suspended in metal slings above his padded weightlifting bench. Because the dumbbells are not returned to Sri Chinmoy’s chest each time (for obvious reasons of safety), it is considered a partial bench press.
On June 28th he lifted two 300-pound dumbbells and held them for a full seven seconds, and by July 11th, Sri Chinmoy had progressed to two 350-pound dumbbells. Olympian Al Oerter pointed out the difficulty of this lift when compared with the bench press found in most gyms: “Dumbbells are much, much harder to lift than a barbell. Every person has a weaker side. Their stronger side helps their weaker side when using barbells, but of course, not at all with dumbbells.”

“My weightlifting is my prayer-life to inspire my sisters and brothers of the entire world.” – Sri Chinmoy