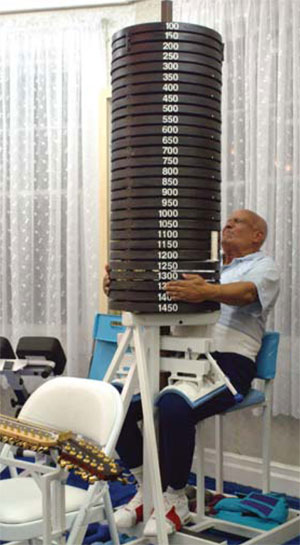 The third major lift that Sri Chinmoy introduced was the seated calf raise. In May 1986, he began his journey with 300 pounds. By October the same year, he had progressed to 700 pounds. As the years passed, he added more and more weight to his overworked knees. On September 16th, 2004 – eighteen years later – he set his personal record of 1,650 pounds during a lifting session at home.

Just two months later at his weightlifting exhibition on November 13th, he chose to lift 1,500 pounds in public. By this time, the weight stack was so huge that Sri Chinmoy’s face was hidden behind it. He grasped the sides of the lower plates and, with a tremendous heave, lifted the stack so that the full weight rested on his thighs. In his next item of the evening, he did 20 repetitions with 1,200 pounds. This lift was a great favourite and later became the source of many imaginative lifts.

“I do weightlifting to inspire people to shine and to fulfil their dreams in their own fields.” – Sri Chinmoy