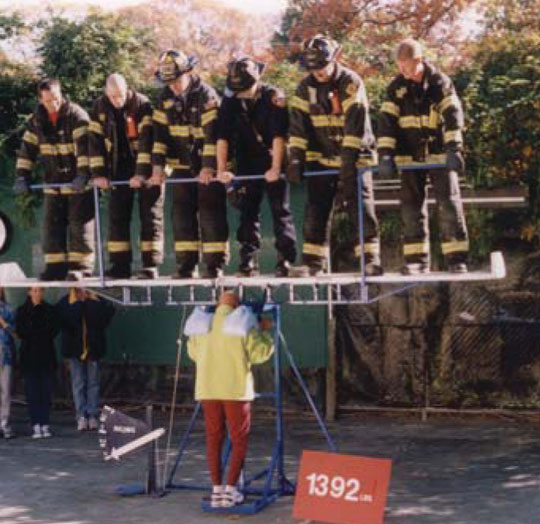 This unusual lift was initially done on the standing calf raise machine. A narrow plank was simply placed across the top and Sri Chinmoy would ask various men to stand on it. There was no handrail to prevent them toppling over when the plank tilted backwards under the upward force of the lift. But Sri Chinmoy was determined to persevere with this lift and so a proper truss with a handrail was constructed that could be attached to the standing calf raise machine. By October 31st, 1986 he was lifting 10 men on his shoulders for a total of 1,547 pounds. In 2004, he lifted 11 men for a total of 2,256 pounds, establishing his all-time personal record. This became one of Sri Chinmoy’s most famous lifts – in New Zealand he lifted 100 Jersey cows (one at a time) and in Chiang Mai, Thailand a baby elephant weighing 980 pounds.

“My lifting is all done on the strength of my heart’s oneness with the world.”
–Sri Chinmoy